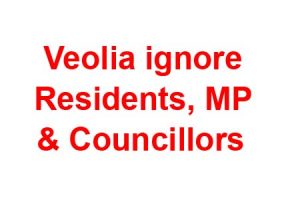 On Monday 24th July,  at an evening meeting lasting about an hour, Veolia met our elected representatives: Karen Lee MP, County Councillor Robert Parker, City Councillors Neil Murray and Tony Speakman. Veolia staff present were Keith McGurk (Regional Director-East), Christian Okenyi (General Manager with responsibility for the Lincoln operation), and Victoria Cooper (Regional Communications Manager -East). At the meeting Veolia confirmed they had no desire to move to an alternative site and were determined to appeal the decision to refuse their planning application.

Request for Veolia to attend or host a Public Meeting: Karen Lee said that local residents said this was an important issue and she urged Veolia to demonstrate good faith by getting involved with local residents through a public meeting

Veolia’s response was to explain that the company had a communications strategy in place consisting of visits to residents living in the area close to the site, a mail shot to residents and an open-day at their Long Leys Road site. They were not ruling out a public meeting but would wait and see how successful was their own communications approach.

Veolia to work with the City Council to find an alternative site: Neil Murray said that talks between the City Council and Veolia were continuing about finding an alternative site in the Lincoln area for the proposed Waste Transfer site and asked where Veolia stood on the matter. Veolia’s response was to emphasise that the primary objective was to get planning permission to develop their Long Leys Road site by building a Waste Transfer station there. There was no desire to re-locate but if an attractive location was offered then it would be seriously considered.

Reason for appeal: Veolia’s response was that the company felt that the decision of the Planning Committee to refuse their planning application for a waste transfer site was wrong and therefore their intention was to appeal the decision and thereby to ask a Planning Inspector to decide.

Karen Lee MP said
“If this scheme were it to go ahead it would have a big impact on the daily lives of over a thousand people in the Long Leys Road area . So I’m really disappointed that Veolia did not show any willingness to engage with local residents at a public meeting and to listen to people’s real concerns”

Councillor Rob Parker said
“To my mind the meeting whilst cordial did not produce any positive benefits for residents beyond some maybes from Veolia. As we stand now, this big, multi-national company are clearly putting their own interests ahead of those of the local community and local people”.

The LLRA’s reaction to the meeting outcome: “It is clear that Veolia intend to carry on with their plan to build a waste transfer station despite overwhelming opposition from residents, local businesses and our elected representatives. As Veolia are effectively ignoring the alternative sites offered, the only way the Long Leys Community can now protect our residential area is by the whole community working hard together to ensure that Veolia lose the appeal with the Planning Inspectorate.”