Update: 11:00 Tuesday 30 October.
We had clarification last night from the Commons Advisory Panel (CAP), that the intention was not to stop cycling on the path running between Long Leys Road and West Parade. The ban on cycling on West Common will relate to people riding on “grassed areas and damaging it”. It was suggested to CAP that as a minimum the proposed universal signage needs amending to state that cycling is permitted on the path. We will be collating the feedback on other matters before inputting the Long Leys community view into CAP. Thanks to everyone for expressing their views.

The Commons Advisory Panel, the body responsible for the West Common, has proposed some changes to signage, rules and horse feeding locations. LLRA invite feedback from the community on these changes, which include: 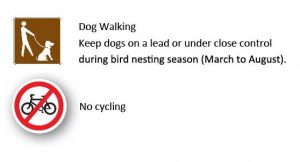 LLRA have already pointed out to the Commons Advisory Panel, on which we have our own representative, that no cycling signs by the Long Leys Road and West Parade entrances would be in conflict with Lincolnshire County Council’s “Access Lincoln” website which shows the Long Leys/West Parade path as an off road cycle route (for further information on this see: accesslincoln.co.uk/cycling/maps/ and the map below).

Details of the proposed signage and locations are shown below. If any members of the Long Leys community wish to comment on these proposals please email us at LLRA@long-leys.org.

Proposed New Signage To Be Displayed