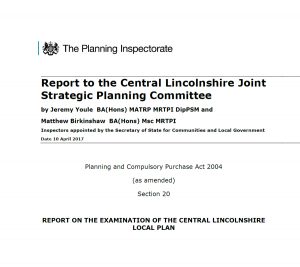 The Planning Inspectorate’s report on the examination of the Central Lincolnshire Local Plan has now been published.

The Inspectors appear to have acknowledged our recent petition to preserve the urban village, as Long Leys Road is briefly mentioned in the report. However the Inspectors believed that the local plan’s allocation for the Long Leys Road business area (Classes B1/B2/B8) was “appropriate and justified”. Given the strength of feeling behind the petition, raised by Emile van der Zee, we were hoping for more from the Inspectors but they do re-state that any developments need to respect the character of the area and neighbouring land uses.

StopVeolia commented:
“It is probably the best we could hope for under the circumstances but it would make sense for us to clarify further with the Inspectors. It reads like a very diplomatic compromise acknowledging the existing operations which are outside B1 and permitting future similar B2-B8 operations subject to it being in character to the area to keep the residents happy”.

Chis Taylor for StopVeolia commented:
“There is no question in my mind that the petition, and the final submission linking it to the consulting version of the plan, had an effect. If we had not acted, we would not have got this paragraph in what is likely to be very close to, if not actually, the final document. So what does it mean? Without this paragraph it would have been harder to oppose Veolia in the future, as B1, 2, and 8 would be accepted without query. This paragraph recognises some of the history, and makes it clear that an argument (as before) based on residential amenity and character of the area is valid. So probably no easier to oppose contentious plans than before, but no harder either! A good result. We might have liked more, but this is as good as we could reasonably have hoped for, and is a worthwhile result for our labours”.

Extract from section 290 of report, mentioning Long Leys:
“Finally land at Long Leys Road (site Ref E10) forms part of a wider allocation in the existing City of Lincoln Local Plan which is limited to only Class B1 uses. However, identification of the site as an EEA suitable for B2 and B8 purposes reflects some of the existing uses on site, which includes a builder’s depot and storage yard. Furthermore, whilst the principle of development in Classes B1/B2/B8 is supported by Policy LP5, this is only where proposals are of a scale that respects the character of the area and/or neighbouring land uses. In the event that a scheme came forward for development within Classes B2 or B8, the plan therefore provides an appropriate policy framework to consider its relationship with surrounding residential uses. The allocation is appropriate and justified.”

You can access all the documents related to the Central Lincolnshire Local Plan at
n-kesteven.gov.uk/central-lincolnshire/local-plan-examination/.
(the planning inspectorate report and appendix documents are at the bottom of the page under the Inspectors report tab.)