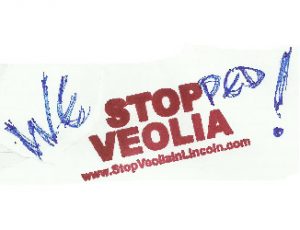 First – many thanks to the scores of people who have sent emails, texts, phone and social media messages celebrating this extraordinary victory.

But be sure, it’s YOUR victory; we’ve had a small group working for you, from Long Leys Residents’ Association together with the StopVeolia campaign, but we couldn’t have done it without the extremely high level of support we’ve had. On behalf of all those team members, we thank you most sincerely.

Veolia’s original proposals are now dead, and the file is closed. The company cannot revive that plan, and the decision of the February 2017 planning meeting stands firm. Veolia emailed us, and we have copies of the letter they sent the Planning Inspectorate, and the Inspectorate’s confirmation to us that no further action will take place. The original plan is dead. View the Official Confirmation letter.

What Made Veolia Pull Out?

View a copy of their letter but in brief the company talks about ‘concerns raised by residents’, and the ‘significant anxiety amongst our neighbours which we would wish to minimise’. It does not rule out further proposals for the site, and the company still claims that the planning decision (by which terms it is now bound) was flawed – but that’s irrelevant now.

Despite Veolia’s new concern about residents (which we should celebrate!) our view is the company recognised there are issues fundamental to their operation which rule out any expansion – principally disturbance from number, size, and hours of vehicle movements, and access to the site. We have the data and video proofs to support this. Indeed we are still pursuing, with the Office of the Traffic Commissioner, changes to Veolia’s existing vehicle operating licence to stop early morning noise disturbances to residents from Veolia vehicle movements. The operating licence is due for renewal in 2020.

We believe it was these factors that made them decide they couldn’t face us or the county council planning team in a Public Inquiry.

But putting that behind us for now, we would welcome – and be constructive participants in – any dialogue with Veolia on alternative uses for the site, should they choose to relocate their operations.

There is however nothing at all to stop Veolia putting in a new, different, application. How likely this may be is pure speculation. But be comforted that the original plan cannot be revived; also that we are ready and watching, with an existing team, and a great deal of knowledge and expertise built and developed over the past 15 months.

What About The Money Raised?

We need to take stock of our commitments and speak to the consultants and legal experts – not least our barrister – to see exactly what our obligations are. We shall also explore whether we can recover any of the money we have spent.

We said at the very outset that any surplus funds would be devoted to the benefit of the community, and we stand by this.

But for now, all we can properly say is ‘watch this space’. Our facebook / email / noticeboard / web sites will remain active (you can unsubscribe if you don’t want this) and we will keep you informed of progress. Our work on this aspect isn’t finished yet.

Once again – thanks for all your help and support! We couldn’t have done it alone.

It’s your victory, and we should all be very proud of what we’ve done.