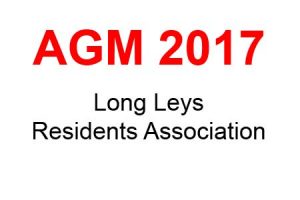 Almost 50 residents attended a lively meeting of the Long Leys Residents Association on Tuesday 23 May, at Discovery House cafe on the St George’s Hospital campus. A range of issues and concerns were raised and discussed, and a new committee appointed. See AGM 2017 minutes for full details.

Residents were joined by County and City councillors who contributed widely to the meeting, and the local Police Officer who addressed matters of security and road safety.

Three topics were dominant in discussion:

Veolia
Whilst the original planning application was defeated in February, due in large part to the community involvement, there are signs that the company may be planning a new attempt to develop the site. Your committee believes we are better prepared than before, and have better weapons at our disposal, to fight again and win. We need to keep vigilant for any early signs of action. Five members of the new committee were active in the StopVeolia group, and will now be working through LLRA.

Traffic calming and safety
There were concerns about parking on Carram Way and the hazards this can cause, and the general safety on Long Leys Road where accidents have occurred close to the West Common entrance. Speeding is a problem. Police undertook to look at this, and to provide leaflets for inconsiderate parking; County Cllr. Rob Parker suggested County Highways were aware of the problems by West Common, and he believed changes were being considered.

Section 106 moneys
The new committee has undertaken to speak to the County Chief Property Officer to establish exactly the conditions and constraints attached to the money – what it can be spent on, and what it can not. This meeting, to be organised by Cllr. Parker, is a priority for LLRA. After that meeting, it is likely that another public meeting may be held to discuss any suggestions for how to spend this money, in the region of £70,000.

Other topics discussed included the operational hours of street lighting, seats in the cemetery, and the apparently missing seats on West Common.