Over a hundred concerned residents attended a public meeting on Wednesday 20 September, to hear more about Veolia’s plans to appeal the planning refusal for a Refuse Derived Fuel production plant at Long Leys Road, Lincoln. The event, jointly hosted by Long Leys Residents Association and the Stop Veolia Action Group and chaired by Councillor Robert Parker was attended by Karen Lee MP along with City of Lincoln councillors and planning managers. Residents have concerns about the impact on their community of increased traffic, the threat of fire associated with waste transfer stations and the risks of flies and odour coming from the proposed Veolia development.

Karen Lee commented: “Since July of this year I have consistently called upon Veolia to attend a joint public meeting with residents to answer and address their concerns. Sadly, Veolia have declined this invitation nor saw fit to send a representative to the meeting. Veolia have been sent a list of 23 questions around the application and have not answered the questions raised, either verbally or in a written response. Veolia seem intent on ignoring the real concerns of residents.” 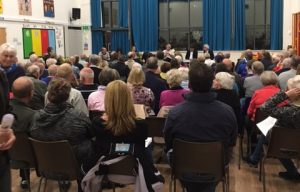 City Councillor Neil Murray added: ”From day one we have explained to Veolia that the site they have chosen is not appropriate for their activities. We have offered them alternative sites around the city that all have one thing in common – they are away from residential housing. We have even offered to buy them a site which they can lease from the City council. This is an attempt to find a solution that satisfies all parties.”

Residents are determined to fight Veolia’s appeal and are targeting to raise £10,000 by 1st November via crowdfunding to cover the legal and technical costs required to present their own case at the Public Inquiry scheduled for February 2018. See: justgiving.com/crowdfunding/stopveoliainlincoln

Read more about residents’ concerns and the 23 questions they would like Veolia to answer at long-leys.org/public-meeting-on-veolia-appeal-wednesday-20th-september/